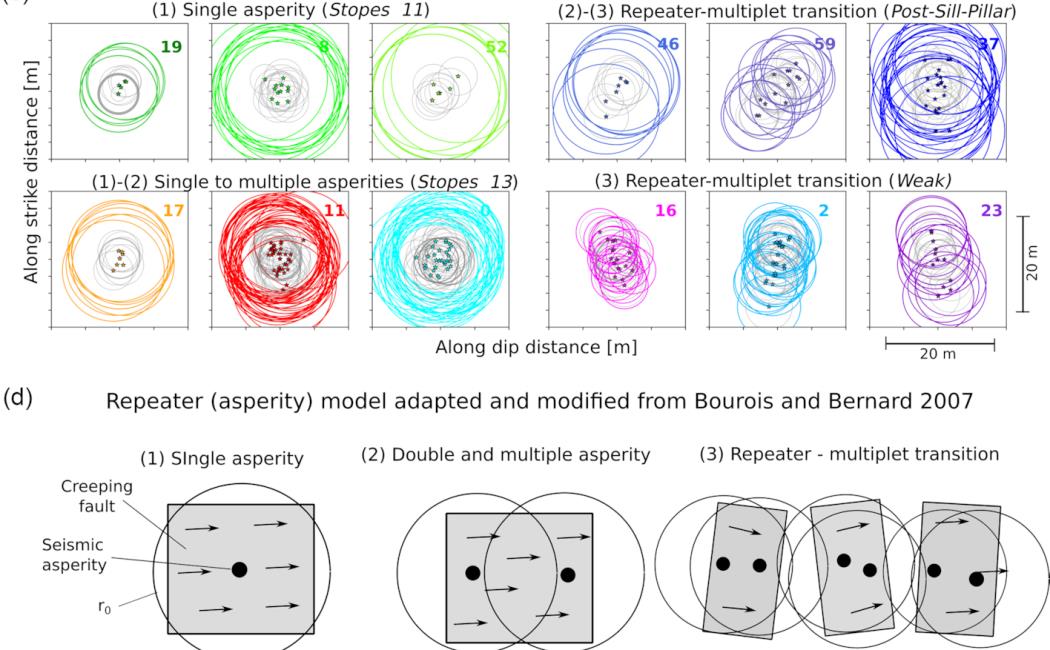 Seismic repeaters are a phenomenon rarely observed in mining environments. In this study, we show that repeaters and associated aseismic slip can be the governing mechanism behind seismic triggering in response to excavation mining, providing new perspectives for rethinking and improving standard procedures for seismic rock burst hazard assessment and mining monitoring. Evidence comes from an extensive multiplet analysis on dense spatio-temporal microseismic event clusters (-2.5 < Mw < 1) that was recorded by a local microseismic network at the Lappberget level of the Swedish Garpenberg ore mine at around 1 km depth. Analysis involved template matching, clustering, double-difference relocation, source parameter and mechanism estimation, as well as interevent time analysis. The results show that almost 80 per cent of the analysed events can be interpreted as seismic repeaters. Source mechanisms demonstrate systematic strike slip faulting with a significant reverse faulting component, indicating that triggering of the repeaters is sensitive to increases in the horizontal compressive stresses. We suggest that seismic repeaters represent brittle frictional parts (asperity) of creeping, planar shaped, pre-exiting structures of several meters composed of weak rock-mass materials (e.g. talc) associated with strengthening friction behaviours. This repeater model and the here used definition of asperity thus slightly differs from its meaning in classical seismological models where repeating events are related to the locked fault patches along a creeping fault. In addition, we identified different asperity types for the different repeater families that we interpret as different friction properties. Some multipet families represent rather a transitional case between multiplet and repeater occurrences which might imply a mixture of weakening and strengthening friction processes, i.e. creep and brittle rupture along neighboured plane shaped anisotropies in a heterogeneous the rock mass. The exact nature of asperities and seismic and aseismic coupling of the rock-mass as well as the propagation mechanism of strain and stress associated with short (days to weeks) and long-term (months to years) post-blast creep remains uncertain and needs to be addressed by future investigations. The understanding of these processes is particularly important for assessing hazard of larger dynamic ruptures.