Unlocking Geothermal Energy Use in Saudi Arabia:  from geology to techno-economic analysis

The Kingdom’s Vision 2030 pledges to develop alternative energy, like wind and solar. Saudi Arabia also has vast geothermal energy resources, in particular along the Red Sea due to high heat-flow from deep in the Earth. Geothermal energy provides sustainable baseload energy that can be used for district heating/cooling, water desalination, even electricity generation.

In our Research Group, we investigate the geothermal energy potential along the Red Sea, targeting specifically syn-rift sedimentary basins near Al-Lith, near KAUST, and at the location of two of the Kingdom’s Giga Projects, the Red Sea Development Project (near Al-Wajh) and NEOM. With state-of-the-art tools, we build 3D geological models of the local area and conduct simulations to estimate the optimal economic and most sustainable use of the geothermal reservoir.

Our research is embedded in the Circular Carbon Initiative @KAUST, in which we collaborate closely with ANPERC and Profs. T. Finkbeiner, A. Al-Afifi, V. Vahrenkamp, H. Hoteit. 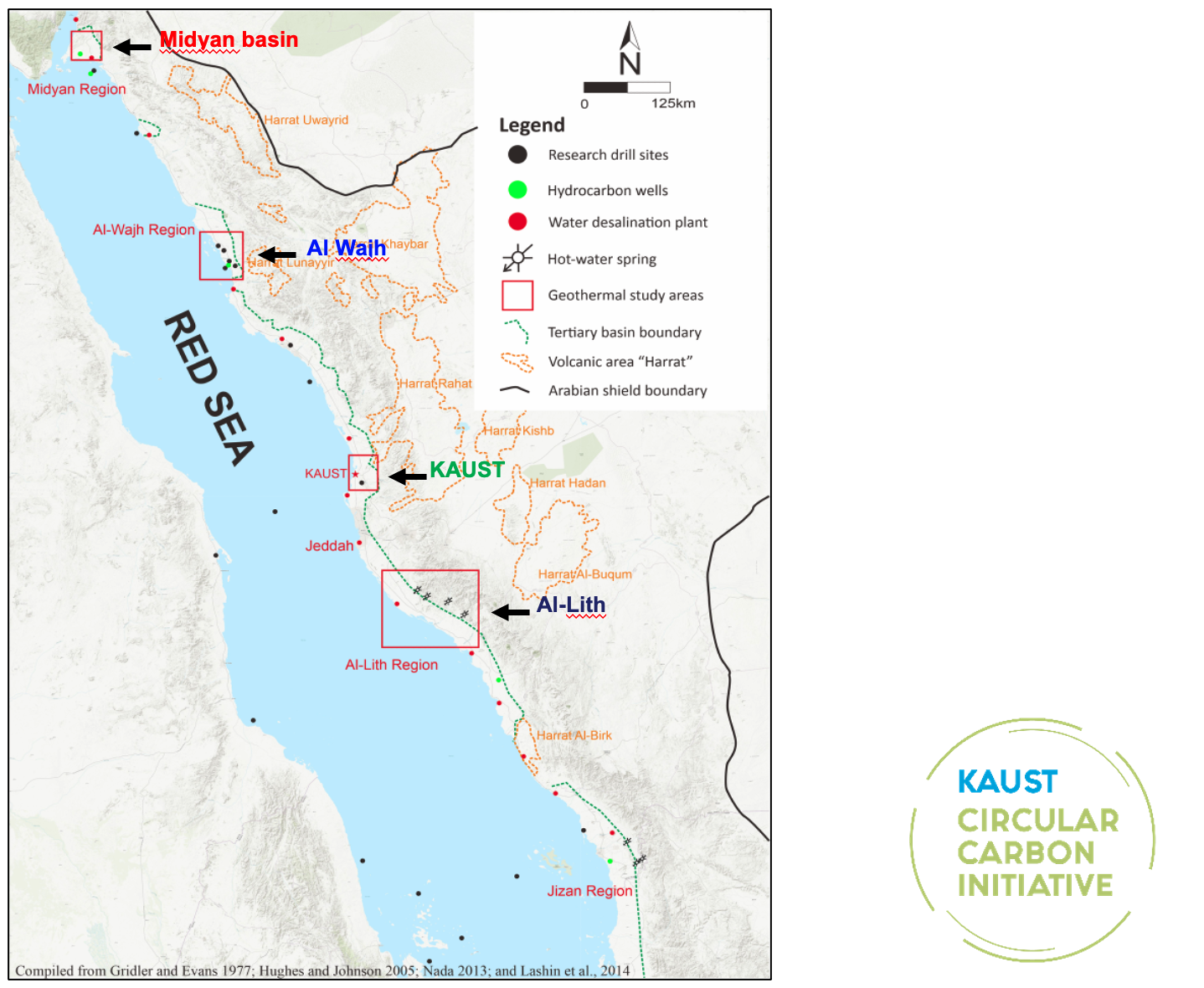 Over the years, the economy of the Kingdom of Saudi Arabia (KSA) has been primarily dependent on fossil-fuel-based energy sources to meet energy and electricity demand [1]. KSA burns more oil for power generation than any other country [2]. Furthermore, the rapid socio-economic growth in KSA (that has led to a significant increase in per capita water demand) and the water stress (limited freshwater) experienced by the country had made KSA be the first country worldwide to use water desalination to meet potable water needs for domestic and industrial applications [3,4]. It is eminent that depending on fossil-fuel-based energy systems to provide fresh water to millions is unsustainable, cost-inefficient, and increases carbon dioxide (CO2) emissions. This unsustainable situation will worsen unless more climate-responsive actions are introduced and enforced now and in the future.

The leaders of KSA have mandated the country's giant energy players, including the Ministry of Energy (MoE), to consider and develop alternative energy options to reduce the domestic demand of fossil fuel through a shift to the use of renewable energy sources and mitigate CO2 emission. To this effect, the government of KSA has initiated a nation-wide circular carbon economy program, which has mandated the major energy players and academic research groups in KSA to champion the widespread use and upscale renewable energy sources [5], and develop advanced technologies that can reuse, remove and recycle emitted carbon. One of these renewable energy sources is Geothermal Energy, which provides several advantages that reduce some of the challenges faced when using these other forms of renewables (such as solar, wind, hydrogen). In addition, extracting geothermal energy, using CO2 as the working fluid, can enable the Carbon capture, utilization and storage (CCUS) technology [6]. In this regard, in our research group, we explore and model the potential of low-to-medium geothermal energy extraction and utilization in KSA for heating and cooling, water desalination and power generation. We focus our research on the hydrothermal resources in the high heat-flow Red Sea rift basin.