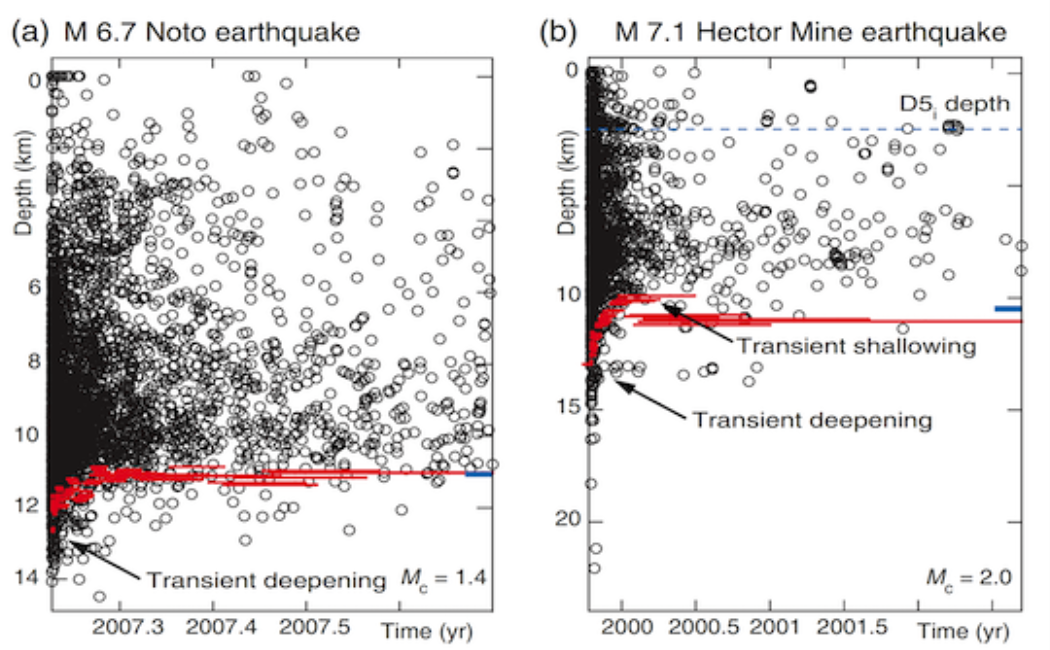 The thickness of the seismogenic zone in the Earth’s crust plays an important role in seismotectonics, affecting fault-system architecture and relative fault activity, earthquake size and distribution within a fault system, as well as long-term accumulation of tectonic deformation. Within the last two decades, several studies have revealed that aftershocks of large continental earthquakes may occur below the background depth of the seismogenic zone, that is, below the seismic–aseismic transition zone. This observation may be explained with a strain- and strain-rate-induced shift in rheological behavior that follows large mainshocks, transiently changing the deformation style below the seismogenic zone from incipient ductile to seismically brittle failure. As large earthquakes transiently deepen the seismic–aseismic transition zone, it is plausible to assume that larger mainshocks may cause stronger deepening than smaller mainshocks. Corresponding observations, however, have not yet been reported. Here, we use well located seismic catalogs from Alaska, California, Japan, and Turkey to analyze if mainshock size positively correlates with the amount of transient deepening of the seismic–aseismic transition zone. We compare the depths of background seismicity with aftershock depths of 16 continental strike-slip earthquakes (6≤M≤7:8) and find that large mainshocks do cause stronger transient deepening than moderate-size mainshocks. We further suggest that this deepening effect also applies to the mainshocks themselves, with larger mainshock coseismic ruptures being capable of extending deeper into the normally aseismic zone. This understanding may help address fundamental questions of earthquake-source physics such as the assumed scale invariance of earthquake stress drop and whether fault-slip scales with rupture length or rupture width.